Methyus.com At It's Best And One Of The Top Largest Magician's Websites On The Internet

Anyone, who knows me, knows that when I do something, I do it BIG. My website is definitely no exception. Methyus.com, now at it's best, has become one of the top largest magic sites on the worldwide web. I would feel pretty confident in saying, it is most likely the largest among magician's personal websites... 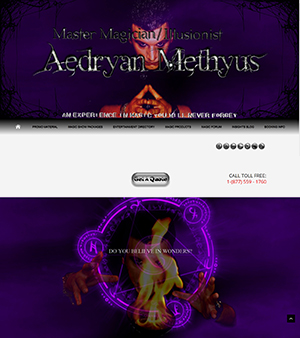 Since it's date of birth on October 17, 2003 (a most suiting time of the year) - over an entire decade ago, Methyus.com has continuously grown, expanded and evolved right along with each new, ever-evolving technology. On average the website has undergone a complete redesign from code to content to face-lift approximately every two to three years. This will be it's first, long overdue overhaul in nearly three years and it's largest, most thorough and meticulous one to date by a monumental landslide. With nearly 650 pages currently indexed on the search engines, Methyus.com has grown to enormous proportions. Anyone, who knows me, knows that when I do something, I do it BIG. My website is definitely no exception. There are other very large magic websites, which are home to the largest magic organizations in the world, such as International Brotherhood Of Magicians and Society Of American Magicians, as well as online magic shops and online community driven magician's social sites, such as magic discussion forums. With the exception of those types of magic sites, Methyus.com, now at it's best, has become one of the top largest magic sites on the worldwide web. I would feel pretty confident in saying, it is most likely the largest among magician's personal websites.


Throughout the three month long, painstaking process of research, testing, design and development, which went into the re-creation of Methyus.com this time around, it became very apparent just how enormous the site has become and how many requirements it now demands to accommodate it. Three months probably doesn't sound like a long time to accomplish all of that, but you would have to know me to really understand the "superhuman-like" amount of hours and work I put into things, which inspire me. Just to give readers a little "insight", over the past three months I have been working anywhere between 24 and 38 hours straight at a time, sleeping for maybe only 2 - 4 hours (most of the time), then rinsing and repeating, day in and day out, while barely even taking time to eat (while working at the same time) or use the bathroom. I've actually been considering replacing my computer chair with a bucket, so I don't have to take time away from my work to go upstairs to the bathroom! ;)

As incredible as my work ethic may be when i'm "in the zone", let me just say, that taking work to these extremes is definitely not healthy (physically or mentally) and I don't recommend it! But, my passions are not "work" to me and nothing makes me happier. However, nothing sounds better right now than two weeks on an exotic island somewhere with someone beautiful to enjoy it with. Or... Losing myself in Grand Theft Auto for two weeks! Either way... ;) But, alas, now it's time to get back to working just as hard on all of my new magic acts and other related business endeavors. But, thankfully only some of that work will entail being in a chair in front of a computer!


A Good Magician Never Reveals The
Secrets Of His Website's Magic


I don't see any reason to go into all of the specific technologies, which have gone under the hood in the re-birth of Methyus.com. I will say that just about every possible advancement in modern web development technology has been implemented into the scripting. And, that I could not be any happier to be back out from under the thumb of a restrictive, unsecure, database driven, content management system (ie; Wordpress). With the exception of my "Smoke And Mirrors" Magician's Forum, it is such a huge relief to once again, have complete control, flexibility and website security and no longer be at the mercy of a lot of other coders, third party plugins and hackers! All of which, have caused a great deal of problems for Methyus.com. But, ultimately, my primary goal in this re-design was "WOW factor", pure, ultra clean code, simplicity and most importantly, my website's end user experience, while they are visiting. All of the above has most definitely been accomplished on an even greater level than I could have ever imagined when I began this re-design!


Some Key Features Of Methyus.com:


Methyus.com and it's visitors now have the safety and security of an SSL certificate.


If you are reading this press release, it is my hopes that when you leave, you will take with you at least some sort of useful knowledge or wisdom from my insights and in return, share your own insights by taking part in discussions in the comment section. And, that is the concept behind the Insights blog in a nutshell. Such a simple concept. Though, a whole new "brand" in and of itself, which I have actually been searching for, for about the past 3 years and it has finally come to be.


As I have already mentioned, the Smoke & Mirrors magic forum - an ineractive online magic community already exists within Methyus.com, but it was designed for magicians only. Here, within the Insights blog, anyone and everyone are welcome and encouraged to connect and interact with myself and others. After many hours of research and testing numerous other commenting systems, the Commentics system I decided to impliment was the most feature-packed and intuitive by a landslide. It is one of the new site features I am most excited about and I am very much looking forward to interacting with friends, fans and site visitors.


My Entertainment Link Exchange Directory has been part of Methyus.com since the very beginning. Though, it has evolved into what I feel is one of the most articulate, thoughtful and artful link exchange directories you will find. However, as any webmaster will tell you, link exchanging is one of the most frustrating and nearly fruitless aspects of web development. I have made the entertainment directory much more prominent this time around by including it in the site's main navigation. I am in great hopes that by doing so, Methyus.com will gain some new high quality link partners, which would add tremendous value to the site, as well as for it's visitors.


Methyus.com is officially 100% responsive. Meaning, the website and all media formats contained herein are perfectly viewable and compatable across all platforms, including cell phones, tablets and virtually all other portable devices and screen resolutions. This technology is every webmaster's dream come true! However, it is still far from perfect or simple to appease all of the multitude of the platforms in today's technology. Many compromises still have to be made, but ultimately PC users come first for me, despite the new "mobile first" approaches to web design.


My clients will find completely updated show package information and descriptions in a much more intuitive and easy to understand format at my Magic & Illusion Show Portal hub. I have also added an Online Promo Portal hub, which puts all of my also newly updated promotional materials in one place for their convenience. And, finally... All of my information has been completely updated for the entire United States and Canada.


Over A Decade Later It Is Still Just The Beginning For Methyus.com


Very much like myself, as a magician/illusionist, a musician, a paranormal researcher and in general - a visionary, endlessly expanding and searching for new and unchartered territory even after performing worldwide for the past 16 years, it is still only the beginning for Methyus.com after over a decade. It is now in a position, which will easily alow it to more than double in size over the next year. In time, Methyus.com will also become the new home of the Strange Happenings Ghost And Hauntings Research Society - my once prominent paranormal research society, which I founded in 2004. I will share all of our findings (or lack thereof). This will include all of our extremely detailed and well documented investigation reports, along with photos, videos and EVP's collected during our investigations. I am also considering the possibility of adding a new paranormal discussion forum. There will also be a lot of expansion on the site for My Musical Passions as well. Then, once and for all, all of my greatest loves and passions in life will be together in harmony...


The Best Is Yet To Come!

Sorry, there is a database problem.

Please check back shortly. Thanks.