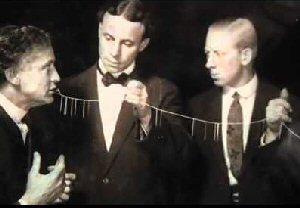 What magic it would take for Erich ben Samuel, an Austria-Hungarian born Jew from a rabbinical lineage, to become the most famous magician of all times and an all-American patriot?

That kind of magic only Harry Houdini could perform – and that’s exactly what he did.

Erich’s surname by birth was Weisz, while Houdini was adopted after one of the most important magicians who ever lived – Robert Houdin, regarded as the father of modern magic for it was he – Frenchman born in 1805, who discovered magic by accident, did not start performing until the age of 40 and had a professional career of only 11 years, who made the magic respectable.

Before Houdin, magic was performed only in circuses, alongside “freaks of nature” – the bias inherited from Middle Ages and bigotry of Scholasticism were still strong. It was Houdin who first used his knowledge of science to develop illusions – and it was Houdin who at the same time skillfully mocked both his audience and the science itself by backing up his magic with pseudo-science; like when he performed the first levitation - he made his son breeze ether and had persuaded the audience that smelling ether was making man lighter. Anyway, his magic worked and his explanations were accepted, the stigma was removed and thus – the door through which Harry Houdini entered the history – ajared.

It’s been said that the greatest of all Houdini’s escapes was the escape from back then backwater town of Appleton in Wisconsin; but if seriously, it’s his escapes from straitjackets and milk cans that made him famous – it seemed that his mind was firmly ruling over matter, dissolving the physical hindrances and making the impossible – possible.

Yesterday, Listverse.com published, in my opinion, one of its best lists so far – Top 10 Fascinating Facts About Houdini. I can’t recommend it strongly enough because the greatest showman ever was at the same time a remarkable philanthrop and patriot with a heart of purest gold.

Somewhere ‘at the crossroads of Science and Mystery, the heart and the mind, the “old days” and the modern age’ – the Great Houdini will encounter Vaudeville itself. As the story goes, “in the spring of 1899, twenty-five-year-old Harry Houdini was ready to retire as an entertainer. For six years he had traveled ceaselessly, performing in small-time dime museums and medicine shows, sharing the stage with physical anomalies and other assorted freaks. For five of those years, his wife Bess had shared his meager lot, performing with him as he desperately sought an act that might lead to greater success and a life in high-class vaudeville. Acrobat, illusionist, hypnotist, and puppeteer – Houdini had tried all of these and more, and nothing had worked. Then he met Martin Beck, owner of a chain of Vaudeville theaters and the rest is history.