Have i mentioned that Lovecraft’s fiction inspired one of my favorite decks of all times, which is immensely helping me to cross over my personal abyss?


Here is the image of 8 of Swords from Dark Grimoire Tarot: 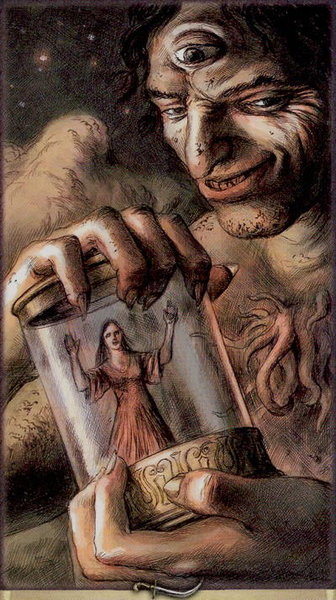 In Bonnie Cehovet’s words: ”The basis of this deck is the concept of Grimoires – the ancient texts of magic, witchcraft and rituals that over time many people have looked on as being books of Black Magic…"

Here the Tarot is presented as a possible book of magic – inspired by the dream worlds of fantasy literature, by grimoires (real and imaginary), by the nightmares that they may have generated and continue to generate in the depths of the subconscious.


This is the traditional depiction of 8
of Swords, from Waite Smith deck:

The girl depicted in the card has wandered far away from her home – the castle in the background – surrounded by seemingly inescapable fence of her own self-limiting thoughts which swords symbolize, hands bound, eyes blinded…

She needs a miracle to free herself – and that’s what all of us need to cross the abyss which Aleister Crowley considered to be the main purpose of the (occult) magician’s career; in his Little Essays Toward Truth he says:

“This doctrine is extremely difficult to explain; but it corresponds more or less to the gap in thought between the Real, which is ideal, and the Unreal, which is actual. In the Abyss all things exist, indeed, at least in posse, but are without any possible meaning; for they lack the substratum of spiritual Reality. They are appearances without Law. They are thus Insane Delusions. Now the Abyss being thus the great storehouse of Phenomena, it is the source of all impressions.”

In terms of Jewish Kabbalah we are speaking of Da’at and B’tzelem Elohim - the “image of God embedded in humanity” – an omnipresent idea in the Jewish thought; Nahmanaides explained it in terms of human soul being immortal, Rashi said it stood for our quality of discernment, while Martin Buber stated that God exist in the space between “I and Though” - in a direct interpersonal relation which is not mediated by any intervening system of ideas (or, as Kabbalists would put it – in the unconditional love for thy neighbour – neighbors of all ethnicities, nationalities, religions, of all sexual identities and of all social statutes included.)

In the Bible, Da’at is mentioned for the first time when we are told that Adam “knew” Eve and she conceived – except being a brilliant metaphor – it’s at the same time quite precise depiction of how an idea (Chochma) develops fully (Binah) and becomes a concrete reality (Da’at).

Da’at is also used to describe prophet’s connection to the Divine, prophet been referred to as haskel vayodea Oti – one who “perceives and knows Me.”

Another question i get asked often is whether Jews believe in this and that prophet - we don’t believe in any other prophets, except the forty eight male, seven female and one gentile prophet, who are recorded in the Bible.

When it comes to my personal believes – i believe in the magic of art, i believe that Houdini, who could thread 30 needles inside his stomach – did have abilities well out of the ordinary and, on my good days, i believe that every woman and every man, tied in ropes and bounded by circumstances and by fears – is capable of Houdini - like spectacular GREAT ESCAPE.

Topic: Eight Of Swords And The Great Escape Of The Upside Down King
3/5 (1)

Website
Keep on blogging! It’s getting through the tough times that make you stronger and then the good times will follow, keep writing about your experiences and we should all pull together.